In a recent study, Bassin et. al. (2016) assessed the activity of the suspended and attached biomass on two types of moving-bed biofilm carriers under identical conditions. The moving-bed biofilm reactors were loaded with K1 (MBBR1) and white Mutag BioChip™ (MBBR2) and evaluated at different pollutant loads.

They concluded that both biofilm carrier types reached the same performance in COD removal and nitrification, but the Mutag BioChip™ used only one sixth of the volume AnoxKaldnes™ K1 carrier used (factor of 1 : 6). The same findings were achieved in elaborate and numerous laboratory scale tests and pilot trials.

The trials had been conducted over a period of 700 days in two 1 liter MBBR systems. To ensure reproducible process conditions, a synthetic substrate was produced from sodium acetate and ammonium chloride, together with the required nutrients. The dissolved oxygen concentration varied in the range from 4 to 5 mg/l. The ambient temperature was around 22°C and the pH value was maintained between 6.8 and 7.5.

After a start-up period of 20 – 30 days required for the establishing of biofilms on the carriers, the measurements were started. The different loads were similar for both reactors. The increase of the organic load was adjusted by increasing the inlet COD concentrations.

Biomass: The total quantity or weight of living organisms in a system, area or volume.

Biofilm: A thin but robust layer of slime or glue-like substance (mucilage) adhering to a solid surface (ie the media) and containing a community of bacteria and other microorganisms.

COD: Chemical oxygen demand is a measure of the capacity of water to consume oxygen during the decomposition of organic matter and the oxidation of inorganic chemicals such as ammonia and nitrite.

COD: Chemical oxygen demand is the total measurement of all chemicals in the water that can be oxidized. TOC or Total Organic Carbon is the measurement of organic carbons. BOD- Biochemical Oxygen Demand is supposed to measure the amount of food (or organic carbons) that bacteria can oxidize.

Chemical Oxygen Demand or COD is a measurement of the oxygen required to oxidize soluble and particulate organic matter in water.

The standard method for indirect measurement of the amount of pollution (that cannot be oxidized biologically) in a sample of water. 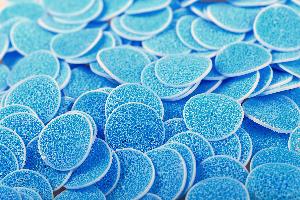 SDK: If we then extrapolate, the new blue Mutag BioChip-25 with its specified area of 4000 m2/m3 will use one eighth of the volume of K1 for the same application. A significant cost reduction in transport, vessel construction, plant footprint and plant overheads.