This article is for carp and koi breeders of all persuasions and skills. 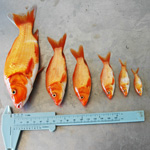 The experienced farmer who wants to improve his breeding returns and the first-time novice breeder who do not know how to react to this observation.

We revisit ‘ancient knowledge’ to explain common observations of fry when indulging in breeding, whether professionally of for pleasure.

It is a common occurrence to observe a wide range of fish size when the fry pond is harvested. Some fish would be extraordinarily large in relation to the average, and many a neophyte farmer will pride themselves when finding some 15-cm fish amongst their harvest of 30-day old juveniles for their first culling.

This fast growing fish are called “shooters”, “shoot carp” or “tobi-koi“ and seen throughout the industry of  koi or carp breeding. Often tolerated and ignored. Often boasted about. Often thinking to breed with the shooter. Mostly not knowing the reason and the negative effect it can have on the rest of the fry population. Also, not realizing it is a sign of improper pond management and that it can be corrected with intervention by the farmer.

Try to understand the graph below:

The appearance of tobi-koi was studied thoroughly by Japanese scientists, Nakaroku, Nakamura and Shogoro Kasahara who dedicated seven years of research to the phenomenon. The results were summarized by G W Wohlfarth (1977) who should also be thanked for getting the original Japanese research articles translated into English for consumption in the rest of the world and ending the agony of breeders in breeding with these shooters in the hope of raising jumbo koi.

Figure 5.4. Typical growth dispersion due to poor fry pond management. The large fish is 150 mm and the smallest 35 mm. More than 4 times longer and a mass of about 240 times heavier. To look at this discrepancy in another way: the large juvenile had to eat the food of 240 small ones to get that big. (Photo copyright © S. de Kock)

The frequency distribution of the size of a koi population in a pond is normally skewed and the width of the distribution may be affected by conditions in the pond. The skewness of the distribution is an indication of asymmetry from the normal, bell shape, distribution.  The investigations of Nakamura and Kasahara (1955, 1956, 1957 and 1961) was summarized by Wohlfarth (1977) as follows:

Nakamura & Kasahara concluded that the skewness is due to the competition for food and peculiar to carp and koi due to their eating habits. Koi fry have an aggressive eating habit. It seems to “attack” the food particle. They also illustrated that goldfish fry that prefer phytoplankton and algae, and generally smaller prey than koi, do not exhibit the shooting phenomenon. Koi fry prefer zooplankton and Clandocera of a particular size but in its absence, will take a wide variety of other natural foodstuff as it grows up. The shooter phenomenon seems to be inherently tied to competition for a food particle of a particular size. If there was any genetic foundation it could be in some degree in the aggressiveness towards eating, thus far there is no evidence of that.

That the appearance of shooters is greater when survival is low could well be because of cannibalism. Cannibalism appears to be tied to the (density fry) : (density adequate feed) ratio when larger offspring develop 'n taste for its smaller siblings drastically reducing the population.

Although the researchers showed that the appearance of shooters was not a function of stocking density and did not exaggerate the skewness when the food supply was proportionally increased, it still remained a factor when trying to extrapolate what happens in a fry pond under normal conditions. The slightly bigger fry eating a slight larger food can effectively remove all the adult pray animals before moving on to a bigger or different type of food morsel. Those fish that slightly lag in size, that may be a little slower in development or a little less aggressive will find by the time they switch from larval to adult Clandocera will fine all the adults gone and also the source of offspring gone. They simply run out of the food in their “prey niche”. In this manner the bigger fry increasingly consume more, leaving less for those who lags behind grow progressively slower. By removing the source of a new generation of prey, the whole supply chain collapses. So, while we can say it is not a function of stocking density, it is in the case of semi-intensive systems a function of pond productivity and the ability of the pond to provide sufficient food organisms for its population as they grow up. As the stocking density increases the ability of the farmer to provide sufficient food to the pond becomes increasingly more difficult and it becomes more difficult to predict and manage.

Having 25% of the harvested fish outside the modal group and responsible for more than 60% of the food consumed as the graph in Figure 5.5 suggests, is clearly not good pond keeping. Considering that the shooter group will be subject to the same culling criteria it can be seen that it results in poor economics due to less efficient use of food and reduced income due to reduced size. It is important for the koi farmer to recognize that it is the supply of sufficient food of the correct size during the first twenty days of stocking the fry pond, that is required to grow all the individuals to their best potential. It is however imperative to maintain the supply of available food for the fry throughout the 30 to 40 days in the fry pond until the first culling.

Breeders are advised to pay close attention to these findings and consider how they should adjust their fry rearing practices to minimize the effects of growth dispersion. It will be well worth the effort.