What's in a name? That which we call a rose,

By any other name would smell as sweet

The Kohaku, Sanke and Showa varieties of koi are collectively known as the gosanke. In this case the "go" does not mean five, but refers to three noble Japanese families. The highest quality of skin and colour is to be found amongst the gosanke and for this reason grand champions are usually selected from these variet­ies. A Kohaku is a white koi with red pattern markings while Sanke and Showa are three coloured koi; red, black and white. Showa and Sanke appeal to all types of hobby­ists, especially those who want to show their koi and compete for top awards. It is not easy to raise a koi with three colours of high quality, but for those that can achieve this feat, there is the possibility of having a grand champion.

Hobbyists and even benching teams sometimes have difficulty in deciding whether a koi is a Sanke or a Showa. It is often said that a Sanke is a white koi with red and black pattern markings and a Showa is a black koi with red and white pattern markings. It is true that when breeding Showa the all black fry are kept at the first cull. However, this does not help to distinguish larger koi exhibiting all three colours.

In his book, Dr Takeo Kuroki referred to Mr Eziburo Hoshino as being the first to breed Sanke while Peter Waddington credits Mr Kawakami (Torazo) as being the first to breed Sanke in 1915. The Sanke variety has its ori­gins in the reign of the Japanese Emperor Yoshihito and the period of his reign (1912 —1926) was known as the Taisho era. Taisho means "great righteousness". Sanshoku means three colours and the proper name for a Sanke is Taisho Sanshoku or Taisho Sanke, which is com­monly abbreviated to Sanke.

The proper name for a Showa is Showa Sanshoku and this variety was developed a little later in the Showa era of Emperor Hirohito 1926 —1989. Showa means enlight­enment and harmony. Jukichi Hoshino has been credited with breeding the first Showa in 1927 using a Ki Utsuri as one of the parents. These early Showa were of poor quality and it was not until Tomiji Kobayashi crossed Showa with Kohaku in the 1960's that the high quality Showa we recognise today were created. 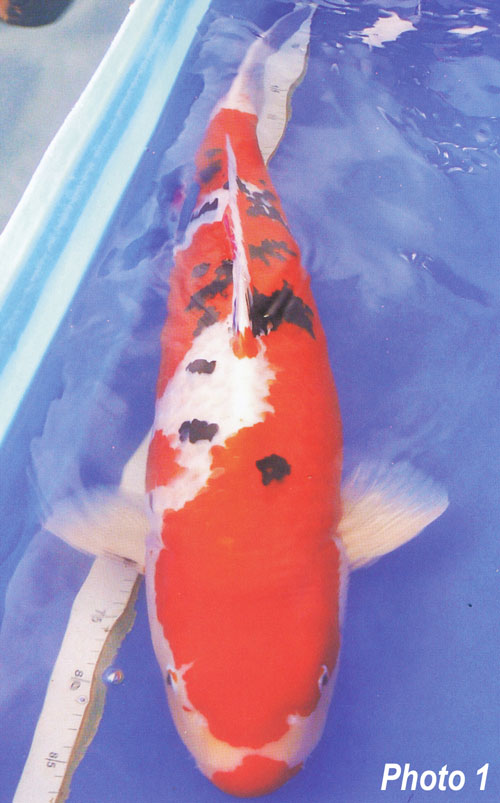 Ideally, a Sanke should have a good white ground colour with a red pattern. In a young Sanke the red may be orange, like a young Kohaku, but it should turn crim­son with time. Ideally, the red pattern elements should be like a Kohaku; large, with two, three or four steps of even hue and extending onto the head but not covering the eyes. The fins should be white and an additional point of appreciation is a few, black, delicate stripes in the pecto­ral fins, known as tejima. The black pattern elements should be arranged in a stepping stone-like fashion above the lateral line, similar to that of the Bekko variety.

It is preferable that the black is situated on the white rather than the red and a black pattern element on the shoulder is particularly appreciated. There should be no black on the head. While black on the head of a Sanke is not desirable, it does not appear to be such a big demerit as it used to be. High quality Sanke with some black on the head have won prizes at Japanese shows and have been featured in the Zen Nippon Airinkai (ZNA) magazine Nichirin. Some Sanke that have lost their entire red col­our have competed well at shows in the Bekko variety. This is because the black of a Sanke is of very high quality. It is shiny and lacquer-like (photo 1).

The red of a Showa is different to that of a Kohaku or Sanke. Young Showa fry are black. Their red starts to emerge as an almost greenish colour, which turns a mus­tard colour and then into a dark orange. This dark orange lightens and in a few years a very deep crimson colour can develop. As with all the gosanke, the white of a Showa should be snow white. Originally, the Showa vari­ety did not have much white but modern Showa are now being produced with much more. A Showa with less than 20% white is referred to as a traditional Showa and a mod­ern type with more white is referred to as kindai. The black on a Showa should rise up from below the lateral line, like mountain peaks, in the manner of the Utsurimono variety class. There should be black red and white on the head. A distinctive head marking dividing the head called menware is particularly desirable. 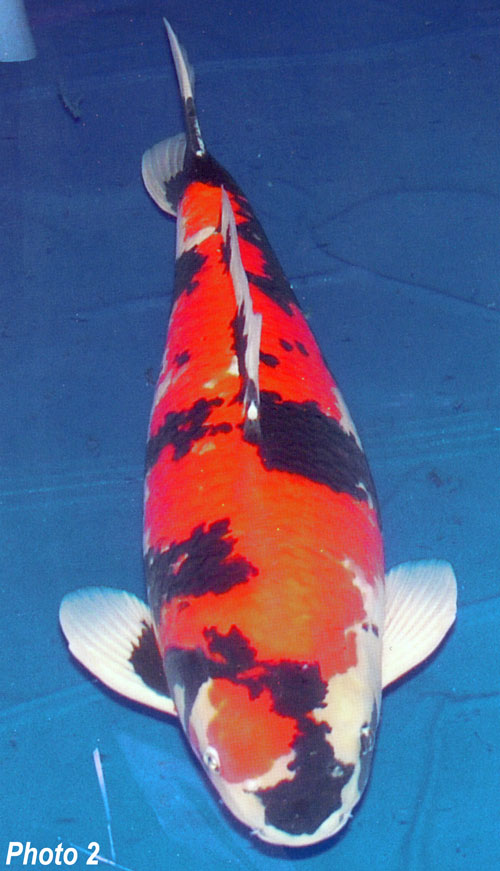 Unfortunately, in breeding programmes that have mixed Sanke and Showa varieties, some in between koi are produced. The purists would say these indeterminate koi should be culled but there is a market for unusual koi and breeders are businessmen.

Here is a Showa (photo 3) with very high quality black. It is the result of a breeding programme involving the Sanke variety.

This interesting koi (photo 4) has black below the lateral line and on the head (Showa features), but the black is of high quality and the fins have stripes rather than motoguro (Sanke features). Although koi like this can have great appeal, they can cause problems for benching at shows. As Showa are basically black fish, they can have black on any part of the body. One place they can have black pigment is inside the mouth. You will sometimes see people holding koi and examining the inside of the mouth looking for black pigment. Since the presence of black pigmentation is random, its absence does not mean the koi is a Sanke. Its presence however, indicates the koi is a Showa. Judges or experienced benchers will look at the overall nature and impression the koi exhibits when distinguishing a Sanke from a Showa. 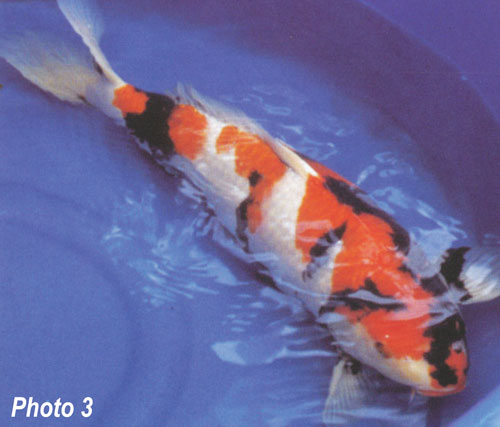 For hobbyists that do not show their koi, the distinc­tion between Sanke and Showa is academic, although, it can be the source of an interesting debate while sitting by the pond with friends and a few beverages! In gen­eral, if a koi is difficult to bench it is not a good example of its type and is unlikely to take top awards.

The interesting koi above (Photo 4), was bred in Japan by a well-known breeder. This breeder had no doubts that it was a Sanke. In which variety would you place this koi? 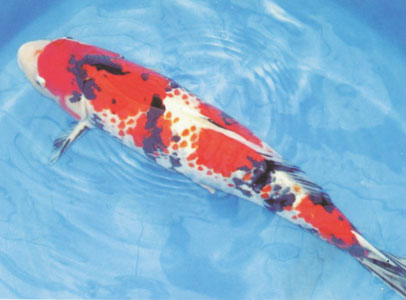 The koi in photograph 4 has a very interesting fea­ture. The red in some areas is dappled. The Japanese refer to this as kanoko. Kanoko is not a variety but a description meaning spotted, like a young deer. koi that are kanoko are benched as Kawarimono, so this also has to be taken into account. Because of its overall high quality, this koi would be competitive in the Kawarimono variety class.

In photograph 5 we have two young koi bred by Torazo. Both are three-coloured koi with great potential to develop into champi­ons. You should now be able to name them both correctly.

Acknowledgement: I would like to thank Rene Schoenmaker for his assistance with the manuscript.

Reproduced with permission from the author from pages of KOISA 03 September 2007.

Note: These images were scanned from the original colour printed pages of the magazine and may not reflect the true quality of original photos.