Dear Kim, Yes, both Dipterex and Dimilin are effective against anchor worm, but both come with warnings and are not readily  available in all countries. You can use Xterm as an alternative to Dipterex..

Anchor worm is a large, parasitic crustacean of the Lernaea species that can infect most cold water fish. The species we normally encounter on koi and carp is Lernaea cyprinacea, 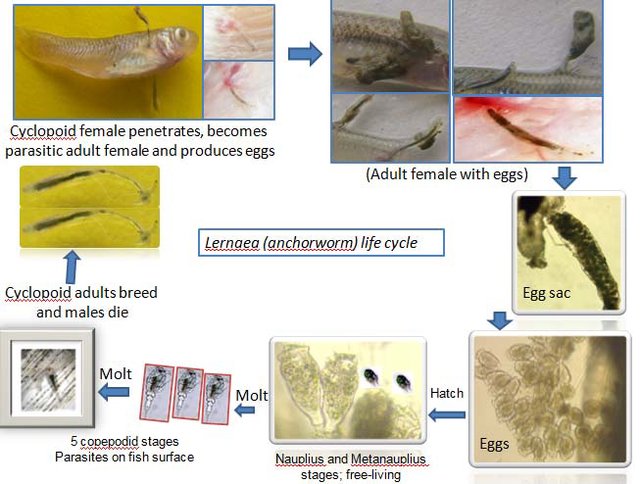 The optimal temperature range for anchor worm is 26°C–28°C. Below 20°C, juveniles are unable to complete their development cycle, and at 14°C, females will not reproduce. However, adult females can overwinter on the fish host, producing eggs when water temperatures warm up in the spring.

The key to eradicating anchor worm  is follow-up treatment. At least 3 applications 6-7 days apart.is required if temperature is above 20°C. The adult worm (it's a girl, just look at her two egg bags!) dies quite quickly, but the stalk and anchor stays behind that can easily lead to secondary bacterial infection under stressful conditions. It is a tall order to de-anchor a 1000 small fish with tweezers, so keep your bacterial count down with antibacterial pond treatment. A high salt content (5kg/1000litre) will help in the post-treatment period.

The juvenile stages of the worm are mobile but populate the gills of the fish where they can cause damage if plentiful. The egg and nauplius stages are not killed by the organophosphate. (some controversy in the literature about this point, but we know the egg will survive treatment). That’s why the follow-up treatment.

The recommended treatment is Dimilin (diflubenzuron) which is a systemic insecticide inhibiting chitin synthesis in insects. It has the potential to kill effectively all insects with a chitin exoskeleton and is thus not very environmental friendly and consideration should be given to what happens to your treatment water.

Theoretically one treatment should be enough because it can stay at therapeutic levels for up to 7 days, but due to the varying organic loads in ponds and filters it cannot be predicted. So two treatments 6-7 days apart is recommended.

Dimilin dosage: In South Africans we believe 1g per 1000 litre of the product is just right, and we certainly have been using it for many years on both koi and goldfish at that level with great success. But it may be too high. A dosage of 0.065 g/1000 litre is quoted, but this refers to ACTIVE ingredient and the Dimilin we buy has 25% Flubenzuron. That translates to an effective dosage of about 0.25g per 1000 litre (or 1 g/4000l as in your case)

So we may have been overdosing by a factor 4 all these years. Why? My guess is that sometime somewhere someone misread 1 gram per 1000 gallon (US) once and got it read as 1000 litre.

I suggest you try Dimilin at the lower 0.25g/1000l and repeat it 6-7 days later. If your anchor worm is a tuff cookie, double up on the second dose….you are on safe ground.

Alternatively, in the absence of Dipterex or Dimilin, Xterm pond treatment can be used. Like Dipterex it is an organophosphate. Just follow the instructions on the bottle. It is very effective and repeat.

Note: It is true that some koi (varieties or breeding groups) may be more susceptible to anchor worm than others. And it is not necessary the “wilder’ ones.

We also witnessed anchor worm from a koi farm infecting Tilapia in the nearby Crocodile River (north-east South Africa). The Tilapia showed very little resistance. This is a wake up call for connecting fish farms to a river system without adequate biosecure measures.

Update: Dipterex was discontinued. It is a controlled substance in most countries but is available under other names in some places.